From Chichester to Dnipro: Getting first aid kits into Ukraine

As the conflict in Ukraine approaches the four-month mark, civilians still in the country are increasingly at risk of being caught in situations that require basic trauma-related skills. The need for knowledge and fundamental skills relating to traumatic injury is becoming more and more fundamental on the ground in Ukraine.

The first aid training means that civilians can provide ‘just-in-time’, life-saving care; covering techniques such as stopping catastrophic haemorrhage with tourniquets, first aid for crush injury, simple airway interventions and recovery position, splinting of fractures, use of slings and pelvic slings, dressing of wounds and safe handling of casualties.

With almost 10,000 Ukrainian casualties since the invasion began (OHCHR, 13 June), this capacity-building operation has been launched to provide civilian populations at risk of conflict with knowledge and basic supplies they need to be able to respond to conflict related trauma. Additionally, our first aid response incorporates essential training and teaching for emergency responders such as ambulance and fire and rescue staff.

UK-Med training teams are providing rapid trainings sessions which focus predominately on how to use the first aid kits and save lives with limited supplies. This reflects the situations that people are most commonly faced with when responding to traumatic injuries likely to be sustained by people caught up in missile or artillery attacks.

Reports of schools, hospitals, churches and other civilian infrastructure have been destroyed or damaged during the conflict.

First aid kits will be distributed to all civilians and emergency service personnel who participate in our first aid training sessions.

The contents of the kits are bespoke; designed by the health team to support trauma needs on the ground in Eastern Ukraine. The contents can include: triangular bandages, safety pins, medical tape, alcohol skin wipes, trauma bandages, sterile swaps, a pair of tough-cut scissors and several pairs of nitrile gloves.

Ten thousand first aid kits have been ordered, split into two units of five thousand each. The first unit arrived in Lviv, western Ukraine, early this month. The unit then made its way to Dnipro, eastern Ukraine, the following day. The second unit is currently being prepared for dispatch from Chichester, West Sussex, this week.

For now, the final destination for the kits and their distribution is the Donetsk Oblast region. However, in the future, the intention is to distribute kits in any frontline areas based on the active UK-Med network and the interest of the affected communities.

To hear more about UK-Med’s work in Ukraine, visit our Ukraine Appeal page. 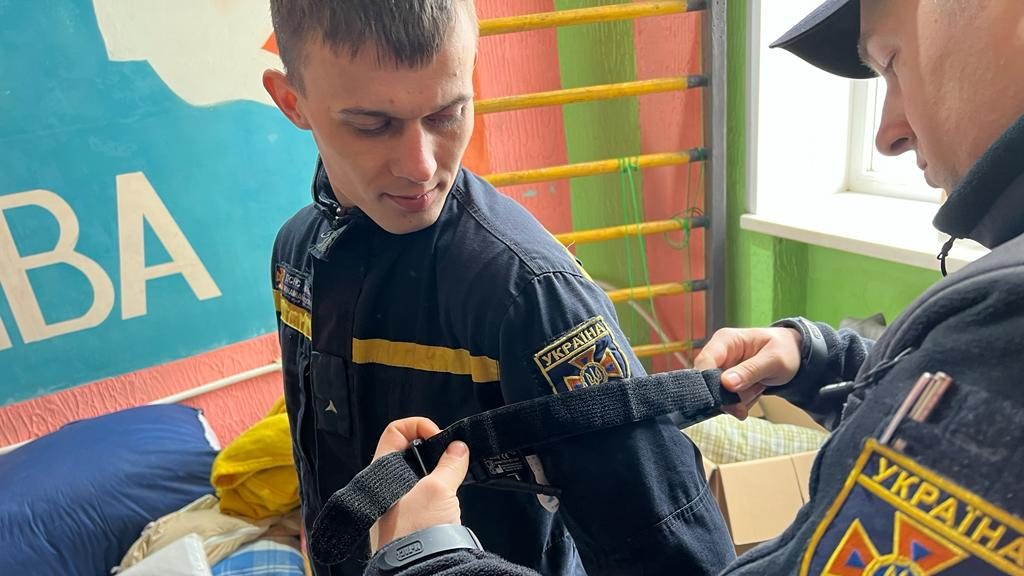 Diary from the frontline: Working in Eastern Ukraine

“It’s the reason I went into medicine, and why I’m going out to Ukraine” – Meet our Health Clinic team in Ukraine

This website uses cookies to improve your experience while you navigate through the website. Out of these cookies, the cookies that are categorized as necessary are stored on your browser as they are essential for the working of basic functionalities of the website. We also use third-party cookies that help us analyze and understand how you use this website. These cookies will be stored in your browser only with your consent. You also have the option to opt-out of these cookies. But opting out of some of these cookies may have an effect on your browsing experience.
Necessary Always Enabled
Necessary cookies are absolutely essential for the website to function properly. This category only includes cookies that ensures basic functionalities and security features of the website. These cookies do not store any personal information.
Non-necessary
Any cookies that may not be particularly necessary for the website to function and is used specifically to collect user personal data via analytics, ads, other embedded contents are termed as non-necessary cookies. It is mandatory to procure user consent prior to running these cookies on your website.
SAVE & ACCEPT